LEARN ABOUT CANNABIS : Indica vs Sativa 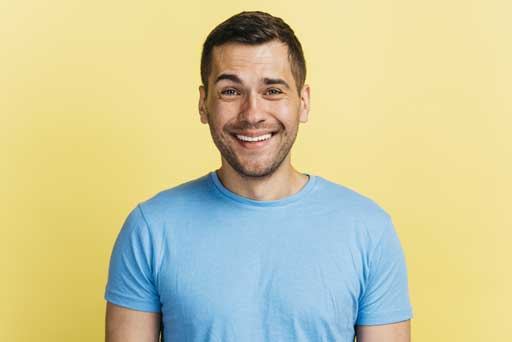 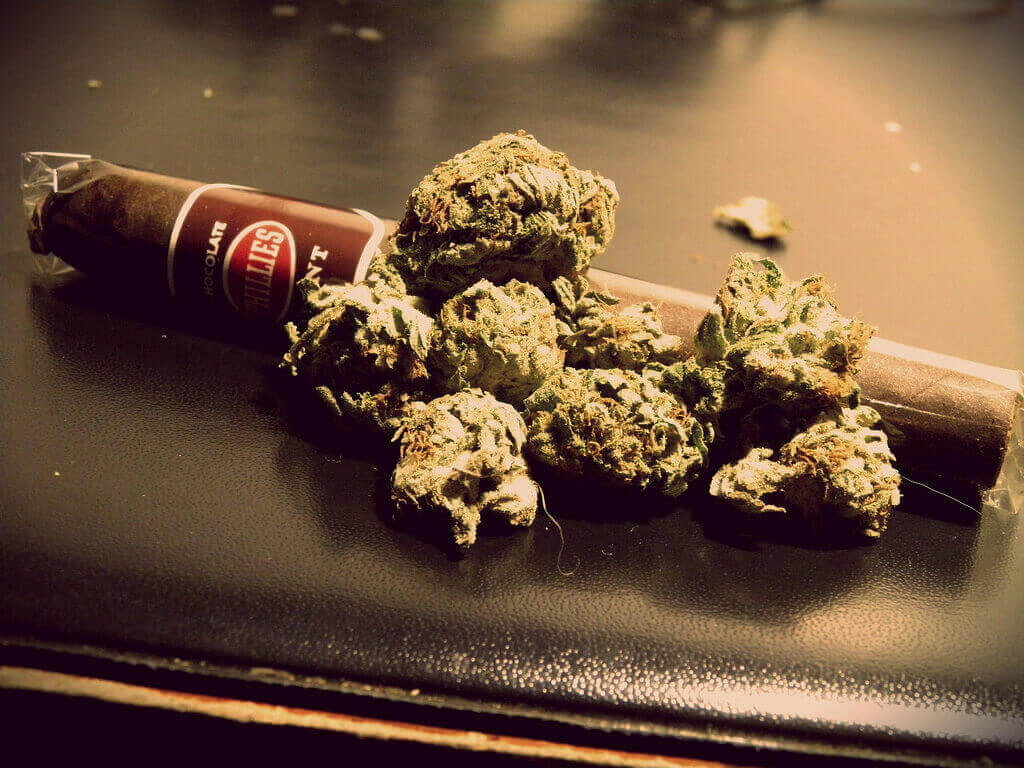 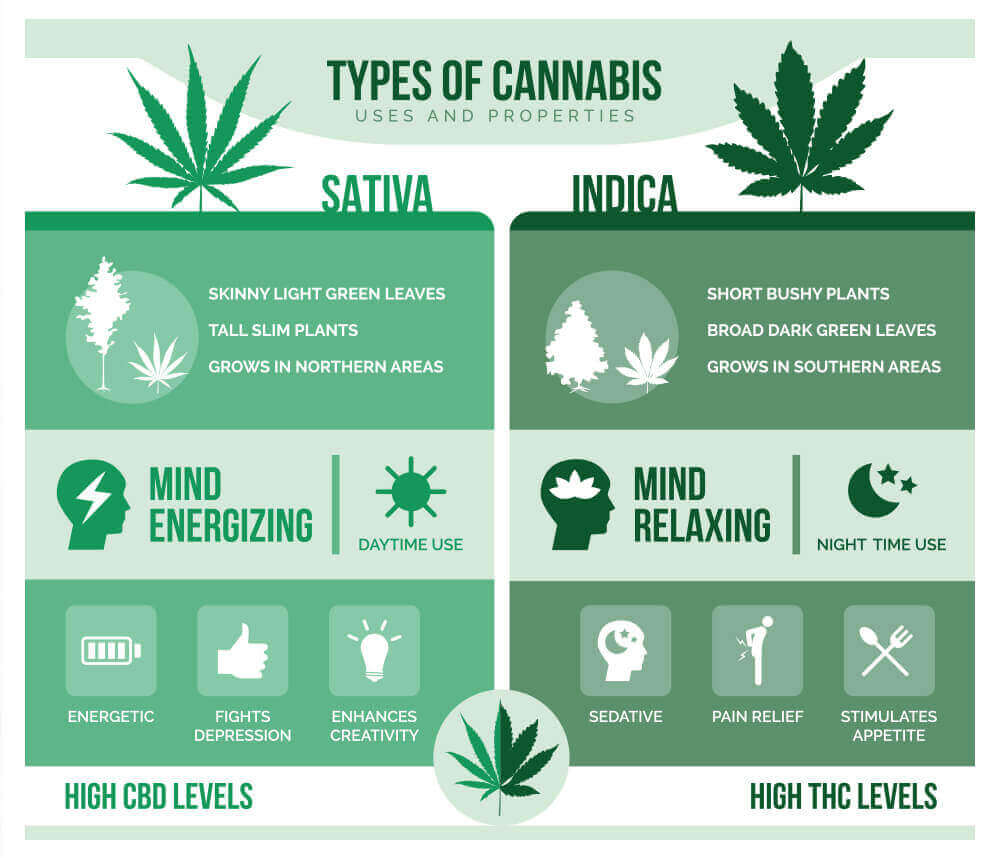 With more than 1,000 strains of cannabis having been bred during the past several decades, patients must be aware of the different types of efficacy available to them in terms of cannabis medicine. Some varieties of cannabis are most appropriate for particular diseases and ailments, but not others. Choosing the right strain is critical to ensuring that patients receive the best therapy possible.

Cannabis is a species of flowering herb that is split into three subspecies: Indica, Sativa, and Hybrids. Ruderalis plants are small and yield relatively little medicine; what they do provide lacks potency and is generally not appealing to patients. Because of this, Hybrid strains are typically avoided by breeders and cultivators; the focus of the medical cannabis community is on indica and Sativa strains.

However, an essential difference between these two subspecies of cannabis is their medical effects and how they influence energy levels and productivity. Indicas tend to decrease energy and are better for consumption in the evening or at night, after concluding the day’s work and activities. Potent indica strains may give some patients what is called “couchlock,” a condition in which they become so relaxed that they care barely get up from the sofa. Sativas, on the other hand, are uplifting and cerebral, enhancing creativity and productivity. Indicas provide what has been called a “body high,” while Sativas deliver more of a “mind high.” Unfortunately, Sativa plants require longer to grow and yield less medicine (flowers) than indica varieties. This is why indica strains have traditionally dominated those available on the black market, where there is no concern for patient need and the sole focus is profit. Patients are given no choice of subspecies or strain when purchasing from the black market is a significant reason it should be avoided. Patients should never trust or consume cannabis medicine without knowing its exact strain and that it was adequately grown, dried, cured, and laboratory tested for purity and potential contamination.

Modern cultivators of medical cannabis purposefully breed and grow a broad spectrum of strains within both the indica and Sativa categories to make available the correct medicine for a particular patient’s unique combination of disease, preference, and lifestyle. Often, patients must maintain jobs or family responsibilities that demand a specific level of energy and can’t tolerate the sedative properties of many Indicas. Other times, patients must seek the most potent non-opiate painkiller possible. Given the choice of chronic pain or the mellowing effects of a strong indica of a particular strain known for its medical benefits, most patients will choose the latter.

Because cultivators and dispensaries are sensitive to the subjective efficacy of particular strains for different patients, they grow and make available as many strains as possible for targeted ailments. Primary focus conditions include HIV/AIDS, cancer, fibromyalgia, glaucoma, Parkinson’s, all types of arthritis, and epilepsy, among many others. Sativa strains tend to be better for psychological disorders like depression, PTSD, and anxiety in terms of particular ailments. Indicas are often the best for pain and inflammation and, thus, are beneficial for patients with arthritis, fibromyalgia, and cancer. However, because side effects like depression and insomnia accompany so many diseases, a patient must consider treating their core disease and its daily symptoms. In the end, each patient will favour multiple strains that will likely fall within the categories of Sativa, hybrid, and indica. Indica strains tend to emit musty, earthy, and skunky odours, while Sativa’s smell is sweet, fruity, or spicy when it comes to aroma. This difference in aroma results from terpenes, the molecules within the plant that are cousins to cannabinoids like THC and CBD. While these chemicals sometimes provide stunningly pungent odours, their most significant benefit to patients is their medicinal efficacy. 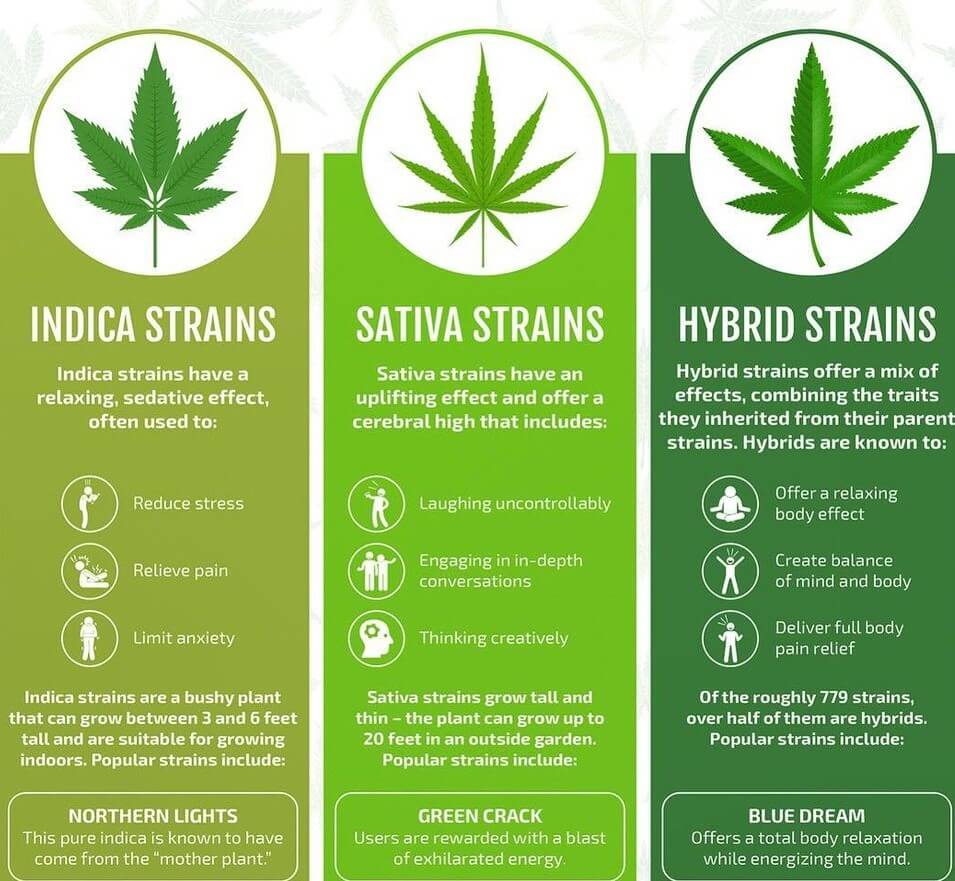 Hybrids are simply new and unique strains that are bred from parents of different types. A hybrid theoretically possesses many or most of the beneficial medical properties of both its parents. Breeders can “cross” any two strains they desire to create a new strain that delivers the best possible medical efficacy, sometimes for particular diseases like lupus, multiple sclerosis, Crohn’s disease, and epilepsy.

It should be noted that any two strains can be mixed to create a hybrid. While indica/Sativa mixes are standard and often noted for their “alert mellowness” and productivity, medical cannabis breeders can also mix indica with other indica or use two Sativa as parents. With so many hybrid strains available to patients, many are a compromise that possesses the ability to kill pain and fight inflammation while not putting a patient to sleep in the middle of the day. Patients who must medicate in the morning or mid-day, typically for nausea and pain, often prefer a Sativa-dominant hybrid but will switch to an indica-dom strain in the evenings and for maximum pain relief.

Hybrid strains that display more indica than Sativa traits are labelled “indica-dom,” while those that lean toward Sativa are similarly dubbed “Sativa-dom.” Often, strings are labelled with a Sativa/Indica ratio, like a 60/40 Sativa/indica. A strain will indicate only a percentage other times, such as “70 percent indica” or “80 percent Sativa”.

Landrace strains are those that evolved naturally within their native environments. Because they weren’t bred and aren’t hybrids, landrace strains offer a very pure example of Sativa or indica, with no interference from humans. Landrace strains are typically 100 percent indica or Sativa, resulting from tens of thousands of years of inbreeding in a particular weather climate and geography.

Heirlooms are landrace strains that have been grown outside of their native environment, such as plants or seeds professionally grown in Illinois that originated on the other side of the world. While seeking their pure indica or Sativa characteristics, such strains lose some of their unique features when grown outside the climate they evolved.

Landrace Sativa appears in Asia, Anatolia, and Northern Africa. These climates provide the long summers and intense sun in which such strains have evolved and adapted to thrive. Indicas are located in Afghanistan, India, and Pakistan. Such strains will not reach their potential if grown within indoor or outdoor conditions that don’t match their native environment.

Eastern Europe, the Himalayan region of India, and Siberia are home to landrace strains and are among the least desired of these naturally evolved plants. As in the Himalayas, such plants are often used to create a traditional hand-rolled hash, with impoverished villagers in such regions subsisting on black market sales of the concentrate that eventually appears in smoking cafes throughout Europe.

What Determines Sativa or Indica?

Readers have already learned that the sometimes pungent aromas produced by many strains of cannabis result from terpenes, the particular molecules in the herb that are similar in many respects to cannabinoids like THC and CBD.

While many might guess that a particular strain of cannabis is categorized as indica, Sativa, or hybrid based on the presence or absence of a specific cannabinoid, or a cannabinoid in a specific volume, it is a terpene that determines this critical status of a strain.

Myrcene, the most common terpene in cannabis, is known to help patients sleep, battling conditions like anxiety and insomnia. If present in a specific strain in a volume greater than 0.5 percent, the strain is considered an indica. If the myrcene is under one-half of one percent, then the strain is deemed a Sativa.

This dynamic is an excellent example of the entourage effect, a theory that cannabinoids and terpenes work together to deliver medicinal efficacy to patients. Many terpenes buffer or enhance the impact of significant cannabinoids like THC.

New strains of cannabis are being created regularly, many of which are hybrids of existing strains that display excellent analgesic (painkilling) or anti-inflammatory qualities. While some strains are better at dealing with nausea associated with chemotherapy (used to treat patients with cancer and Crohn’s, among other diseases), most types of cannabis are very good at this.

Patients must strive to find the strains that best deal with their particular disease or ailment and its symptoms, including the side effects of many pharmaceutical drugs or therapies. This is typically not an overnight project and may require months or even years of diligent effort. Patients are encouraged to continually experiment with new strains in search of greater potency or a superior cannabinoid profile that delivers improved relief. Because this efficacy is so subjective, the advice of other patients can be given only so much weight. The actual test of a particular strain of indica or Sativa occurs only when used by an individual patient when they most need it, such as during bouts of pain, nausea, or insomnia.

Your email address will not be published. Required fields are marked *

How To determine the Cannabis weed quality?

Nature has so much in abundance for us humans. Some of its products are labelled as good, some as imperfect, while others are dubious. Dubious because it's the exact usage of the product which determines its title as good or bad. 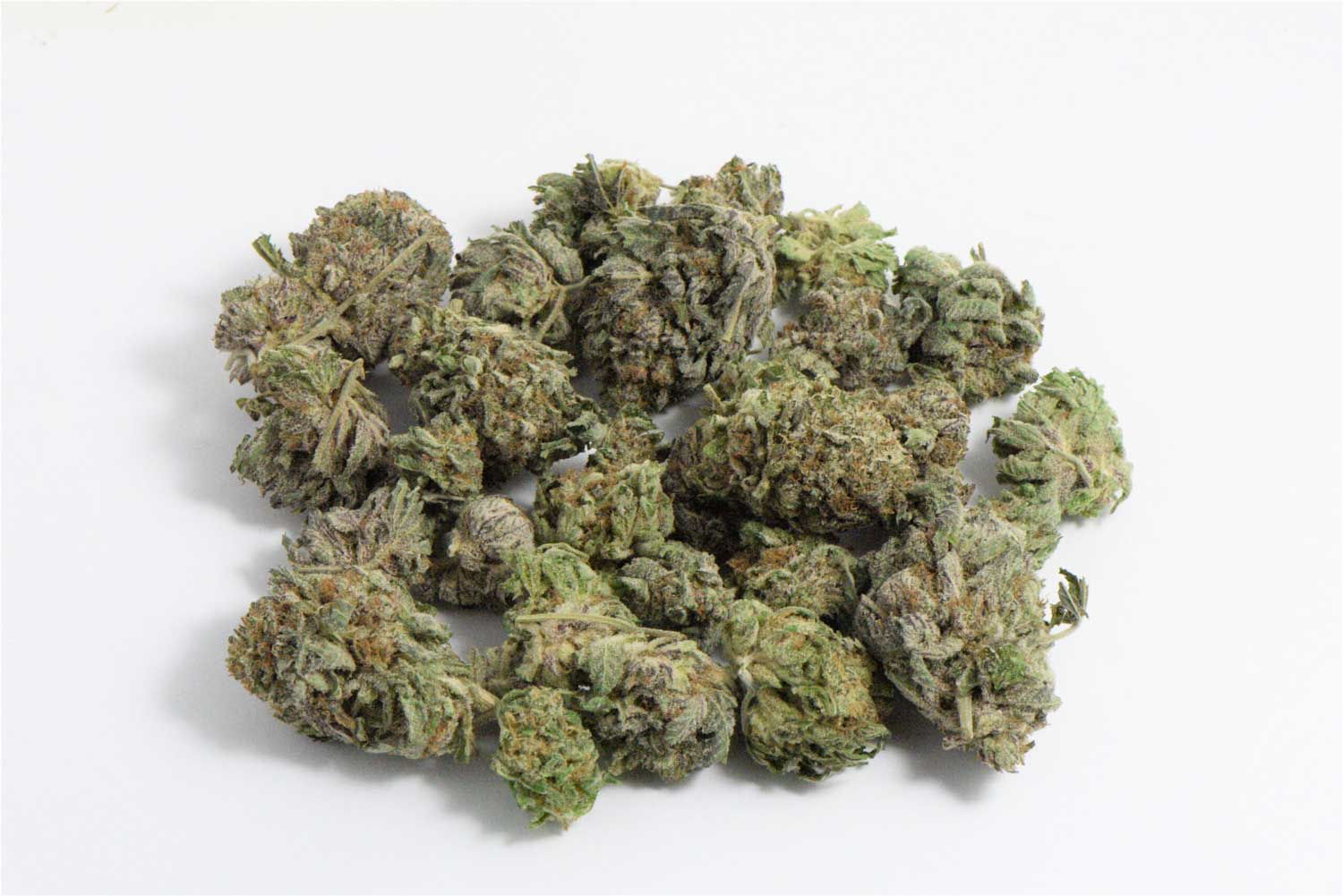 What is BLACK DIAMOND AAAA?

One of the most popular strains, Black Diamond, or the Black Diamond OG Kush, is a North Californian breed famous for its potency and intense aroma. 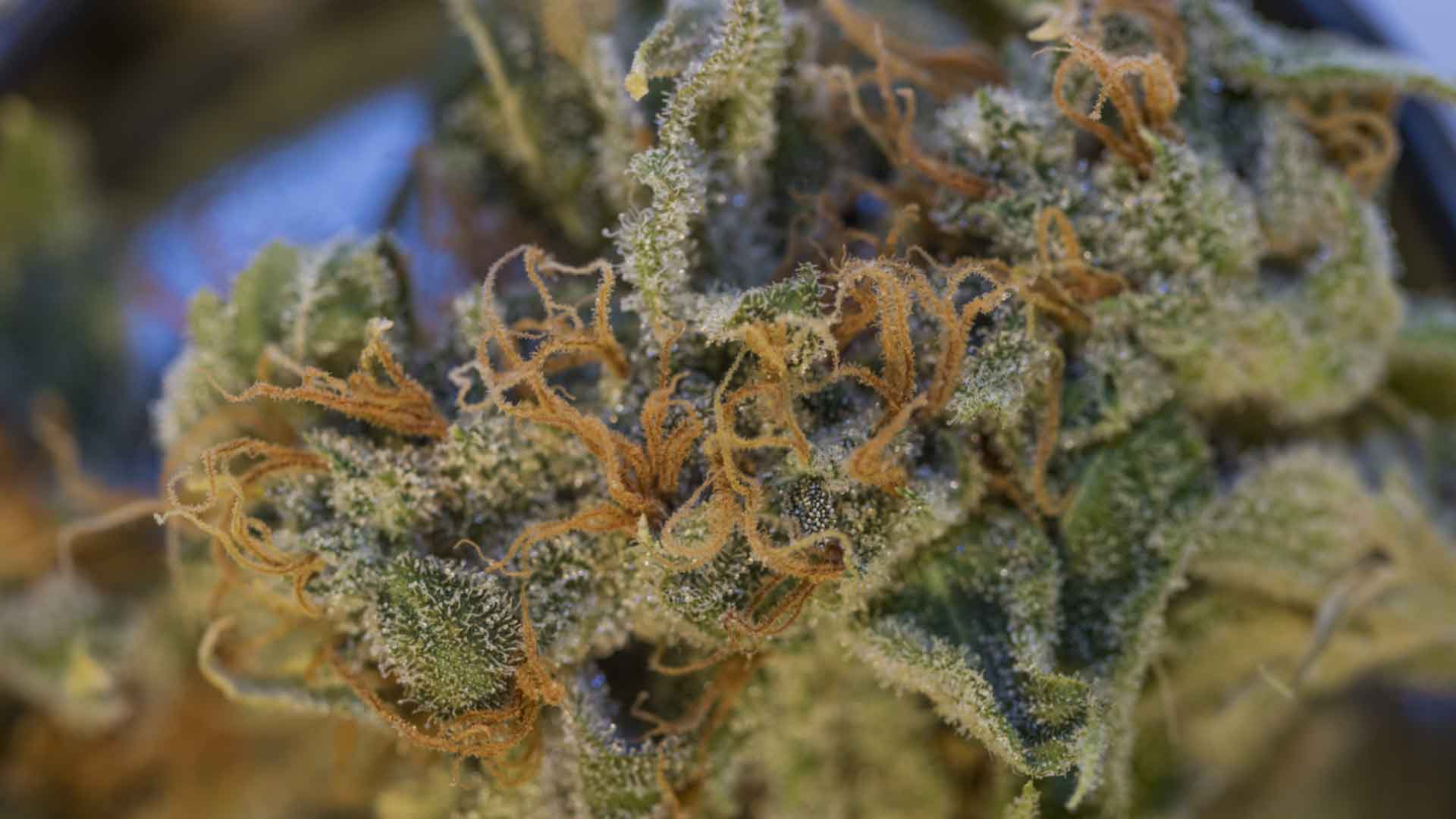 In this complete AK-47 marijuana strain review, we provide the complete guide to one of the dispensary market's up-and-coming heavy hitters. AK-47 is an F1 hybrid from Dutch seed bank Serious Seeds. It was created in 1992, its exact lineage remains secret,

If you live in Alberta, you must be 18 or older.

If you live in Quebec, you must be 21 or older.